Hearing stories of survivorship helps other women in their breast cancer journey. Share your story by sending an email (photos welcome) to info@komenmd.org. Thank you. 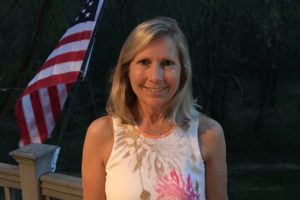 Every three minutes. That’s how often a woman in America is diagnosed with breast cancer. More than 20 an hour, 500 a day, almost 200,000 in a year. In the time it takes to read this essay another woman will be diagnosed.

Mo or daughter with the disease. So not only is it rare for a mother and daughter to
both have breast cancer, it is even more rare to be diagnosed on the same day!
But it can happen. On April 9, 2010, it happened to me and my Mom.

Mom was a 10-year breast cancer survivor when the cancer returned, in her bones. She had been in pain for several months. Trouble standing up sometimes, a couple of unexplained broken ribs, pain from breathing, and finally they figured it out, on that April day.

On the same day, I was diagnosed for the first time. Every three minutes it’s someone’s turn and now it was mine. The cancer was advanced; a large mass, probably lymph node involvement was the diagnosis I received following a mammogram.

When I told Mom, she said this meant we would just add chemo to the list of things we did together. That was Mom’s gift. Even when we were both diagnosed with breast cancer on the same day, she still managed to look for the silver lining she found in every cloud.

I made it my goal to find silver linings as I went through the chemo, the mastectomy and the radiation. To look for them when my hair fell out and I was too tired to get out of bed. I found that silver lining in the compassionate medical care I received, in the patients and survivors I met who shared their experiences and in friends and family. I found it in the negative result I received when I went through genetic testing that meant that my daughter was no more at risk for breast cancer than the average woman.

I wish I could say I found the silver lining while going through chemo with Mom, but that wasn’t to be. Mom never made it to chemo; the cancer wasn’t just in her bones, but also in her liver. Mom wouldn’t be just one of the almost 200,000 women diagnosed each year; she would also be one of the more than 40,000 who dies from breast cancer. Diagnosed on April 9, 2010; gone less than five weeks later on May 13th.

I miss Mom every day and the last year was tough without her. But she was still there for me as I searched for silver linings. As I realized as terrible as cancer is, it can open your eyes to the kindness of so many others and the beauty that exists in the world. A beauty so prevalent that you can find it everywhere you look as often as you want.

Maybe even every three minutes.